Talks with Knox “The Therapy Horse”

Pet therapy has a proven ability to bring joy and comfort to hospice patients while also reducing their levels of stress and anxiety. The Carpenter House in Baton Rouge, LA, an inpatient hospice program of St. Joseph Hospice, offers several animal-assisted therapy programs including one that almost seems a bit magical…a miniature horse named Knox!

We invited Milissa Davis, Knox’s owner, and Elizabeth Smith, Volunteer Coordinator, to talk about equine therapy and how it has helped the patients, families, and staff of The Carpenter House. 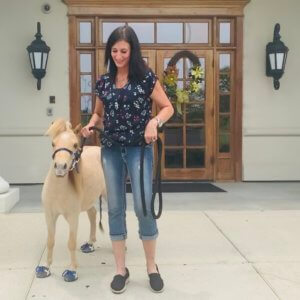 Milissa Davis, Owner and Trainer for Knox The Therapy Horse

Q: How long have you been doing animal-assisted therapy with Knox?

A: I got him (Knox) when he was six months old, and I started training right then. He turned three last Friday.

Q: What influenced you to become involved with miniature horse therapy?

A: My son, Camden, has autism, and he was so afraid of horses. He was introduced to one of my friends’ mini horses, and he fell in love! I spoke with several people in both California and Texas who were involved with therapy horses, and then I had to decide what breeder to get him from. I chose a breeder out of Dallas, TX, and I started training him immediately. Knox was six months old then, and he just celebrated his third birthday.

A: Knox gets training every day, whether he is working with going around cones or different situations that might scare him. I bring him around to stores like Home Depot or Lowes, and other places that offer differing environments. This exposes him to different things, to help with desensitization. You don’t want him to be afraid of anything, so I try to introduce him to different environments I find.

Q: Knox has a brother named Kye. How is Kye different from Knox?

A: Knox and Kye are half-brothers. Kye is spastic, and everything scares him no matter how much work I do with him, and that’s every day. Kye is sweet, but he wants to pull and drag. I’m thinking about getting him a little sled, so he can pull around and have a purpose. Most horses are sad if they don’t have a partner, so it’s good for Knox to have his brother with him.  When they aren’t working, they are in their paddock together as well as their stall at night.

Q: What kind of training did you have to go through with Knox?

A: I started this venture when Camden was 8, and he will be 14 in June. I started it because he has Autism and I wanted to help him. He couldn’t handle equine therapy, so we started working with minis. I traveled to California and trained there for two weeks and then trained for another week in Austin. My training was with people that offer mini-horse therapy. I learned from them, and I did a lot of my own research. I also had to research where I wanted to get my horse.  Once I got Knox, I just started working with him from there on desensitization and how to act. It is constant training for both of us.

Q: How often does Knox visit The Carpenter House? What other programs does Knox do?

A: My goal is to be here once a month. It’s such a beneficial thing for the patients and their families. I love it, and Knox loves it too. Knox also goes to libraries where we read books to children and let them pet him. We also have a group of special needs kids that come to see him at the barn. It really relaxes them while giving them a sense of purpose. When they can brush him, wash him, and lead him around, they really forget about all of their stresses and just feel good; they feel like they’re doing something important.

Q: What was the most profound interaction you have had with a patient here at The Carpenter House?

A: It was on day one.  There was a couple here, and they were married for over 50 years. The wife said that her husband hadn’t woken up in a week, so he might not wake up. When he encountered Knox, he started talking. Remarkably, he said, “a horse? Do you remember, Honey, I told you when we were in our 50s that I wanted to see a horse before I died?”

I was biting my cheek, trying not to cry. I gave her my card, and she called me to ask about using a picture of me for something. She told me her husband died about three hours after we left. I cried and cried. That made me decide that I wanted to keep doing this.

Q: In your opinion, why does mini horse therapy work so well?

A: The reason is, when you pet a horse, there are endorphins released into your body that cause happiness. That’s a given, proven scientific fact. So, they release endorphins to help make you happy. That is one reason why it has become so popular. When I bring Knox here, and I rub their hands on his face, and they start talking about their childhood and having horses. Sometimes, the family hears stories they have never heard about, or they hear stories they haven’t heard in a long time, and they remember them. It gives the family and the patients something they need. 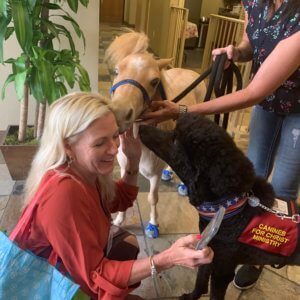 Q: How long has Knox been coming to The Carpenter House?

A: He’s been coming here for the last year and a half. He tries to come once a month or at least every other month.

Q: How meaningful do you feel Knox’s visits are?

A: This environment can be intimidating. I really think Knox makes a big difference. Sometimes we may have a patient lying in bed and feeling low, but when you bring Knox in and help them pet Knox, they are revitalized. Interacting with Knox sometimes causes them to remember their childhood when they had a horse, and they start talking about it. It is just amazing what therapy can do; not only horse therapy, but animal therapy in general.

Q: What was the most profound interaction you’ve seen Knox have with a patient at The Carpenter House?

A: There was a sweet, sweet lady that was here for a very long time. She had a very tough and traumatic upbringing, and I think Knox could sense that. When he would come to visit, and she would pet Knox, and he would just lay his head on her bed by her so she could pet him and give him a lot of attention. I think they sense when people have been hurt. Also, the first time Knox came to visit, there was the older man who hadn’t woken up in a while. We learned that it was one of his last wishes to see a horse before he died, and we unknowingly helped make that made that happen.

Q: Why do you think Knox works so well with the patients and employees The Carpenter House?

A: Knox brings joy and laughter to patients and families as well as our staff. He just enjoys walking around, and they enjoy seeing him. It breaks up their day and makes them not think about what they’re doing at that moment. It just brings a smile to their face. 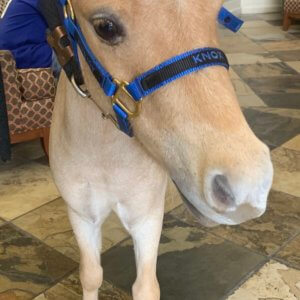 Knox was seemingly born to do this job, as seen in the way he interacts with hospice patients, their families, and the care team. He offers comfort, soothes anxious emotions, gives unconditional love, and helps create meaningful family memories, not only for Milissa’s son, but also for hospice patients, and others with special needs. Interacting with Knox is an uplifting, heartwarming experience and a beautiful example of “providing peace, comfort, and dignity,” the words that guide the St. Joseph Hospice and The Carpenter House staff and volunteers every day.